Then came the crunch. I was seriously afflicted with an undiagnosed illness. I found my thought full of fear, self-pity, self-condemnation, and all the other arguments of self. A Christian Science practitioner helped me very wisely, but the thought persisted, "Why can't I go to a doctor and be diagnosed? Then I'll know exactly where I stand." Uncertainty dogged me. In other words, I was saying that all my years of study had never really convinced me of the unreality of matter and mortal mind. The practitioner made it clear to me that constant study of any subject was usually undertaken with a view to passing an exam, and I had come to a stage where the examination was set, and it was up to me. Gradually, with the practitioner's help, I was blessed by God with the ability to talk to mortal mind and see it as a liar, and to realize the allness of God. When the healing came it seemed so easy. I never knew what the condition was, and I do not want or need to know. 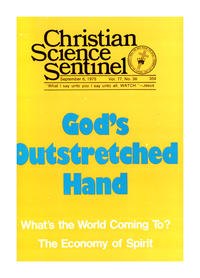