Sometimes we find ourselves faced with a choice of two apparently irreconcilable and perhaps unpleasant alternatives. Perhaps the choice favored by our conscience threatens complications and difficulty; the other alternative promises less disturbance, but our conscience is uneasy about it. After much mental wrestling we make a decision, sometimes on one side, sometimes on the other. Experience shows that conscience is the safest guide, but dilemmas recur until, through the light of divine guidance, we penetrate their deception.

I well remember the challenge that presented itself when I wished to apply for membership in a Church of Christ, Scientist. I realized that Christian Science had opened up to mankind the scientific basis of the healing works of Jesus and that it offers complete salvation from the bondage of sin, disease, and death. This Science shows the reality of the spiritual kingdom within. I had received proof of this. It was clear that this saving truth had come to me through the Christian Science movement established by Mrs. Eddy, and that unless the movement was actively supported by those who had been blessed by it, it could not continue to fulfill its purpose. In fact, unless individuals had supported it in substantial numbers in the past, I might never have heard of Christian Science!

Send a comment to the editors
NEXT IN THIS ISSUE
Article
Troubled Teens, Perplexed Parents: Some Solutions 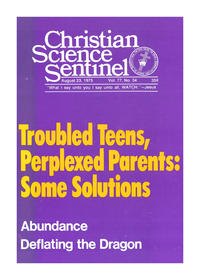