Some years ago when our youngest son was a baby he became...

Some years ago when our youngest son was a baby he became quite ill. In a convulsive seizure he was rushed to the hospital. After a few days I became unhappy with his treatment there. I thanked the doctor, released him from the case, and brought our son home. A Christian Science practitioner was called, who took up prayerful work. There didn't seem to be any progress. The child could not retain any food or liquid and appeared to be wasting away. My husband had agreed to rely on Christian Science treatment but was fearful and concerned. A member of the family questioned my love for my baby, as she felt we should seek medical help. I told her I did love him and that he was being cared for.

That day while talking to the practitioner the thought came loud and clear: "What God cannot do, man need not attempt." This is from page 231 of Science and Health by Mrs. Eddy. She goes on to say: "If God heals not the sick, they are not healed, for no lesser power equals the infinite All-power; but God, Truth, Life, Love, does heal the sick through the prayer of the righteous." I felt uplifted and sure of God's love for His idea. It was clear that no matter how much I loved that babe, his Father-Mother God loved him more. That was the turning point. He blossomed into a healthy, happy baby in a few short days. 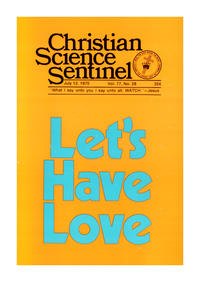