After our eldest son had attended first grade for several months,...

After our eldest son had attended first grade for several months, the principal of the school called me and said that our son could not continue his studies but should be enrolled in a special school for retarded children. The principal said he would give me three months to make a decision.

One day not long afterward the boy became quite sick with fever and also difficult to control. I asked a Christian Science practitioner for help. With loving assurance she told me not to see our son as my own human child according to the concept of man in the story of creation as told in Genesis, Chapter 2, which regards man as material and mortal. Instead, I was to see him as God's son, created spiritual and perfect as God's image and likeness, according to the concept of man in Genesis, Chapter 1.

Send a comment to the editors
NEXT IN THIS ISSUE
Testimony of Healing
As a teen-ager I was dissatisfied with my way of thinking and... 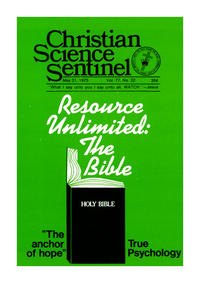