A few months before the termination of the 1914/1918 War, I was discharged from the Army Military Band as being medically unfit for further military service. I appeared to have all sorts of complications. However, I worked hard for two years and saved enough money to enable me to study at a recognized college of music.

Some time later I saw a Christian Science lecture advertised, and my wife and I attended. The theater was crowded, and I had never seen so many happy faces. One sentence quoted by the lecturer kept recurring to me. It is from the textbook, Science and Health with Key to the Scriptures by Mary Baker Eddy (p. 425): "Consciousness constructs a better body when faith in matter has been conquered." I needed a better body, but I could not understand how Christian Science would provide me with one.

Send a comment to the editors
NEXT IN THIS ISSUE
Testimony of Healing
Some years ago my daughter, who was then nearly four, had... 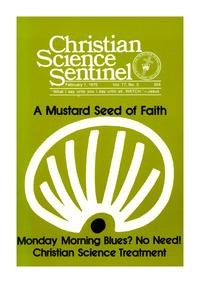