To Tell the Truth

One Sunday afternoon John came to his mother, looking scared. He said he had to be down at the police station within an hour. He and two other boys were to be questioned by a detective about a small pistol that had been taken from a place in John's house, where his parents thought it had been put safely away.

John's mother, who was a Christian Scientist, listened as calmly as she could to her son's story. He told her how the pistol, which the family used for target practice, had been taken without his knowledge by another teen-age boy, named Fred. Fred had flashed the gun around, trying to impress a group of other teenagers at a party several evenings before. 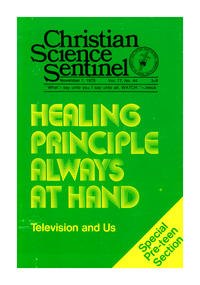