The Bible records many instances of quick, joyful acceptance of healing. For instance, when Christ Jesus healed Peter's wife's mother of a fever, she did not remain in bed to rest or refrain from normal duties. Instead, we're told that she immediately arose and ministered to her household. Those who witnessed his raising of the young man of Nain from death were not filled with disbelief and doubt. Instead, they promptly glorified God and acknowledged Jesus as His prophet, or messenger.

At the raising of Lazarus, Jesus instructed the people who were there to "loose him, and let him go." John 11:44; May he not have detected and rebuked in them incredulity that would have kept Lazarus restricted, bound with unyielding beliefs?

Send a comment to the editors
NEXT IN THIS ISSUE
Article
Stage Fright? 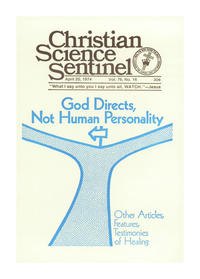