As a young woman I was hospitalized for tuberculosis

As a young woman I was hospitalized for tuberculosis. Recently a law was passed in our state requiring all public school teachers to have a test for tuberculosis. As I am a substitute teacher, I went at the appointed time for an injection, which tells whether the disease is present. If there is no reaction to the shot, there is no disease; but if there is a reaction, it is considered that there is evidence of tuberculosis. I was told by the nurse to return in three days so she could examine the arm.

On the second day I noticed redness and swelling, and it was still there on the third day, so I did not go to have my arm examined. I asked for prayerful treatment from a Christian Science practitioner, and it was given for a few days. After that I left it with God, knowing He would show me what to do next. Some time later I saw the practitioner who had helped me, and she asked me what I was doing about the situation. I replied, "Nothing." She pointed out that there is no evasion in Truth, so that afternoon I called the nurse and made an appointment for another test, and she gave me a second large dose of the fluid. Again I asked the practitioner for help, and we looked up everything Mrs. Eddy says about consumption (tuberculosis). There was much fear in my thought to be overcome, and she told me to look up what Mrs. Eddy wrote to Calvin C. Hill in the book We Knew Mary Baker Eddy, Third Series (p. 43): "Dear one, look on the cloud of lungs till you see the Father's face—the sense of life not in nor of matter and this spiritual recognition will destroy the cloud forever, it will." 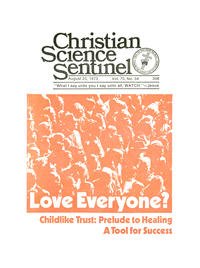