The Knock at the Door

A picture on the dining room wall of my grandmother's home evidently made a lasting impression on me as a small boy, for I have recalled it many times. It portrayed Jesus in a white robe knocking on the closed door of a home by the side of the road. I remember wondering why no one had answered his knock or let him in. Years later this memory was to flash back again at a very critical moment in a desperate personal experience.

The firm where I was employed in an executive capacity sold out to a larger corporation, and the executives of the old group were summarily discharged, or demoted and replaced by people from the larger company. One week after I had been assured that my own status would not be altered, it was. Promptly I determined not to let resentment take over. But as it became obvious that the new executives were far less competent than those whom they now supervised and the honesty of the new policies left much to be desired, resentment crashed the barriers of my resolve. At this point a severe, frightening physical disorder added to my woes. 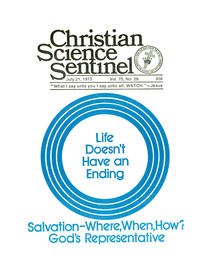