My written expression of gratitude for the wonderful experience...

My written expression of gratitude for the wonderful experience of Christian Science in my day–to–day living is long overdue. This occurred to me while I was reading a religious article on The Home Forum page of The Christian Science Monitor. The article included reference to a statement by Mrs. Eddy in Science and Health (p. 3): "Are we really grateful for the good already received?"

I had gone to an optometrist to be fitted for new reading glasses. During the process, the optometrist asked if I had had any difficulty with one of my eyes, because he saw something foreign in it. I told him that several weeks before something had blown into the eye, but that it seemed to have cleared away almost entirely. He said he would attempt to brush away the particle. Being unsuccessful, he recommended I see a doctor who could remove it, because it had embedded itself. I thanked him for his help and thereupon telephoned a Christian Science practitioner for prayerful help to remove the trouble. I mentioned to the practitioner that for many years past I had used this statement from Science and Health (p. 463): "A spiritual idea has not a single element of error, and this truth removes properly whatever is offensive." I said that in every instance it had brought about a healing. He referred me to an article in a Christian Science Sentinel, where it was related that someone had applied that same statement but found too much emphasis was put on the latter part of it—"and this truth removes properly whatever is offensive." The writer had found an important step was to acknowledge God as primal cause and His idea as wholly pure. Seizing upon that thought, I applied it in my treatment of myself, and the foreign particle promptly disappeared and left me entirely free.

Send a comment to the editors
NEXT IN THIS ISSUE
Testimony of Healing
For three generations my family has been wonderfully helped... 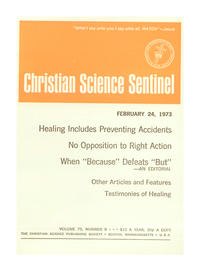