Getting Rid of Anger

Anger is never justifiable. Not even the anger that professes to be righteous. The Bible says, "Wrath is cruel, and anger is outrageous." Prov. 27:4; Elsewhere the Scriptures occasionally refer to the "anger of the Lord," but God, divine Love, can never be wrathful. Mrs. Eddy explains in Science and Health: "The manifestations of evil, which counterfeit divine justice, are called in the Scriptures, 'The anger of the Lord.' In reality, they show the self-destruction of error or matter and point to matter's opposite, the strength and permanency of Spirit." Science and Health, p. 293;

Christian Science maintains that wrath, anger, hostility—all violent emotions—are malevolent characteristics of the carnal mind. They are vicious mental enemies to human well-being that should be resolutely mastered in thought before they appear in more visible and aggressive forms.

Send a comment to the editors
NEXT IN THIS ISSUE
Testimony of Healing
Fifty years ago in India angel thoughts appeared in my life... 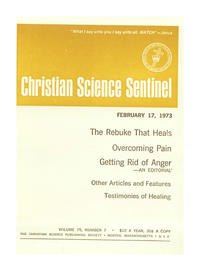