Christian Science is the Science taught by him whose pure thought prevented others from condemning an adulteress even though the law said she should be stoned, who propounded the inspiring nature of God's truth to a woman who had had five husbands and was then living with a man who was not her husband, who spoke of adultery as something committed in thought long before it takes place in an overt act, who said, when criticized for associating with sinners, "They that be whole need not a physician, but they that are sick." Matt. 9:12;

The standard of morality, according to God's law as Christ Jesus taught it, is lowered not only by those whose outward acts betray their infidelity but also by those whose inward thoughts lack the purity, the understanding, the forgiveness, the love, that Jesus said we must have if we are to be God's children. 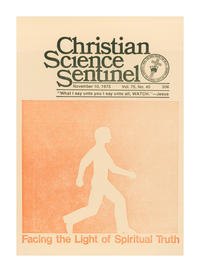