Christian Science was presented to me in 1951 by a dear friend...

Christian Science was presented to me in 1951 by a dear friend, and since then my daughter and I have realized the importance of applying in our daily lives our understanding of its healing efficacy. We have had many proofs of its healing and protective power.

For many years I was unable to eat much solid food. There was an extreme disorder of the stomach and severe hemorrhage. This condition continued till a stage was reached when I became very weak and nervous. The doctors I consulted seemed unable to recommend a remedy. Although I strove to do my daily duties at home, I found it very difficult to be active for more than a couple of hours at a time, after which I would be obliged to lie down and rest.

Send a comment to the editors
NEXT IN THIS ISSUE
Testimony of Healing
In Science and Health Mrs. Eddy states (p. 392), "Your decisions... 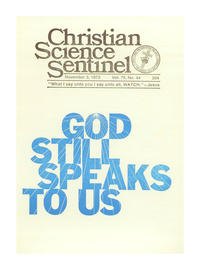