A few years ago, when our family was in need of a home, I became...

A few years ago, when our family was in need of a home, I became very discouraged, fearful over a lack of funds to purchase a house, and even bitter because I thought I would never be able to raise my children in the same atmosphere as I had been raised. Being a country girl at heart, I longed for trees and flowers and open spaces. We were living in a very large metropolitan city.

One day these words from Matthew kept coming to my thought (6:8): "Your Father knoweth what things ye have need of, before ye ask him." But then after that would come the argument, "If He knows our needs, why doesn't He meet them?" That night I called a Christian Science practitioner and told her of the despair I was feeling.

Send a comment to the editors
NEXT IN THIS ISSUE
Testimony of Healing
It has been my privilege to be a student of Christian Science for.... 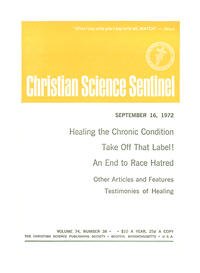