It was still light that July evening as Paul climbed down the ladder from the ship to the dock at Sandusky, Ohio. It was just after eight. He would have time to walk uptown and see a movie. He'd settle for a Western with John Wayne. After that he would have to get back to the ship. They were leaving a little before midnight.

As he walked toward the gate, he kept turning around to look at the ship, the Enterprise. He liked the look of it there at the dock— huge and majestic. He liked the thought that it was his ship. For it was, in a way. He was working on it. It was an unusual summer job for a junior in high school—working as a deckhand on a Great Lakes freighter.

Send a comment to the editors
NEXT IN THIS ISSUE
Article
Jealousy and Envy—Who Needs Them? 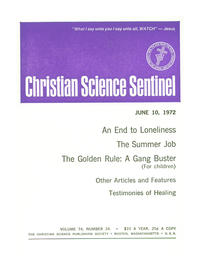