Annulling the Aftereffects of War

"Dick, if you want to get out of the war, get the war out of you." This advice was given to me by a friend at a time during World War II when I was suffering from battle fatigue. As a Chaplain for an infantry regiment, I had been through months of combat in North Africa and Sicily, and still faced months and months of fighting in Europe. The prospect was most disheartening.

My friend, who had been healed by Christian Science treatment of a serious wound received during World War I, sensed my need of encouragement and counsel. His advice went to the heart of the matter and showed me what to do. I needed to eliminate from my consciousness the mental elements that cause and perpetuate wars and to see how they really do not exist in God, divine Spirit, or in man, His likeness. 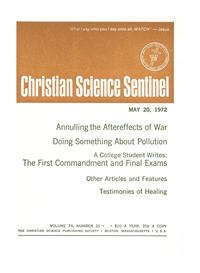