On a cold winter day in 1866, Mary Baker Eddy was lying critically ill. Suddenly, after reading her Bible, she was able to get up and walk across the room. In her book Retrospection and Introspection, Mrs. Eddy describes the spiritual uplift she felt at the time and the way it brought her physical healing. She writes: "The character of the Christ was illuminated by the midnight torches of Spirit. My heart knew its Redeemer." Ret., p. 23; And she continues: "Being was beautiful, its substance, cause, and currents were God and His idea. I had touched the hem of Christian Science."

During the years that followed, Mrs. Eddy proved that the vision of spiritual beauty that came in that moment of physical crisis and healed her was more than a passing glimpse of transcendent being. It was a flash of insight into eternal Truth—the scientific consciousness of divine reality, which dispels the false sense of existence as corporeal, discordant, sick, sinning, and dying and heals whatever in earthly experience is ugly and afflictive.

Send a comment to the editors
NEXT IN THIS ISSUE
Testimony of Healing
Many years ago I was ill with rheumatism and a nervous... 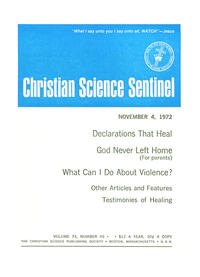