A father stood in a swimming pool in water up to his shoulders, arms outstretched, and called to his son, a toddler poised joyfully on the edge some six feet away. Fearlessly the little boy plunged in as he had many times previously, each time paddling beneath the surface until within reach of his father, who scooped him from the water and helped him return for a fresh plunge. The boy's loving trust in his father and his joy in achievement served to shut out all distractions at the busy pool.

As his trust in his Father-Mother God grows, the student of Christian Science learns to reject the influence of fear. With this faith his awareness of the spectral, illusive nature of what appears to the physical senses to be danger can render him fearless like the child at the pool, his encounters with the elements bringing him progress and filling him with innocent joy. 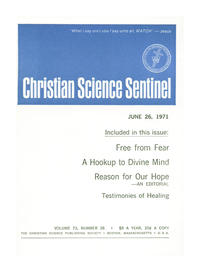