Almost twenty-one years ago a dear relative handed me a copy...

Almost twenty-one years ago a dear relative handed me a copy of the Sentinel. This was my introduction to Christian Science, and for it I am most grateful. At that time I had the smoking habit and also drank to keep up with the boys. In general I felt that the world owed me a lot, since I had experienced a very unhappy childhood. Through Science I was healed of the desire to smoke and drink, and a short time later I joined a branch Church of Christ, Scientist.

About three years ago my wife had a beautiful healing of a serious stomach disorder, which had been accompanied by great mental depression. A Christian Science practitioner was called for treatment many times during this experience, which lasted several weeks. My wife herself also did much prayerful studying of the Bible and Science and Health by Mrs. Eddy to arouse her thought from fear. She and I both fully realized at this time that God is the only physician, that God is Life and Life can never be destroyed. 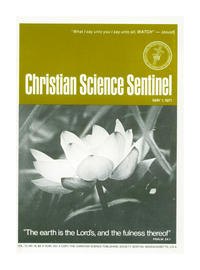