Homer, in the Iliad, gave the Greeks a model of youthful strength, beauty, and valor in Achilles. But Achilles had a weak point. His mother, Thetis, according to the legend, attempted to make him invulnerable by dipping him in the river Styx. A vulnerable spot was left, however, on the heel by which she held him. This spot proved to be his undoing, as it was here that Paris mortally wounded him during the Trojan War.

The term "Achilles' heel" has come to mean a weak spot—a vulnerable point in one's character or body—where one can be hurt either mentally or physically. It has become acceptable to believe that each of us has some tragic flaw, or at least some blind spot that could rob us of fulfillment. 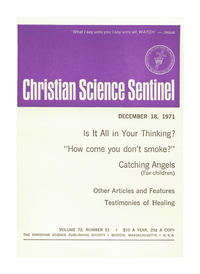