Christian Science was introduced to me many years ago when I...

Christian Science was introduced to me many years ago when I was visiting a relative in another city. She gave me some Sentinels, and after reading them I knew that I wanted to learn more of this truth. Upon returning home I purchased a copy of Science and Health by Mrs. Eddy and have continued to study and apply this truth since that time.

Some of the healings in our family are related here. While my son was attending camp with a group of boy scouts—all Christian Scientists—he awoke one morning and noticed that one of his hands was swollen twice its size and that he was not feeling well. As they were camping on a boy scout reservation, it was necessary to report to the camp doctor, so the counselor and my son went to see the doctor. He examined his hand and decided from the symptoms the boy had been bitten by a black widow spider. The doctor wanted to give him medical aid, but my son decided to rely on Christian Science. Prayerful treatment was begun by the camp counselor, an experienced student of Christian Science, and a complete healing resulted within a few days.

Send a comment to the editors
NEXT IN THIS ISSUE
Testimony of Healing
Christian Science had been unknown to me before it came to my... 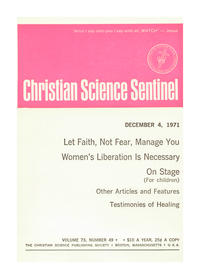