As a youth I had the privilege of attending a Christian Science Sunday School,...

As a youth I had the privilege of attending a Christian Science Sunday School, but I neglected to appreciate my religious training and fell away from it. About the middle of the 1930's, I attended a Church of Christ, Scientist, and experienced an awakening to my need for what Science reveals. At this time I was under bondage to an alcoholic problem, which had plagued me for seven or eight years and had grown loathsome to me.

Shortly after my renewed interest in Christian Science my mother suffered a nervous breakdown, and I read the Lesson-Sermon in the Christian Science Quarterly to her each day. At the end of a month's time I felt I had been healed of the desire for alcohol and tobacco. Later the full healing of these habits was confirmed. My mother was also healed of her problem.

Send a comment to the editors
NEXT IN THIS ISSUE
Testimony of Healing
Several years ago I awoke one morning very ill with pain and... 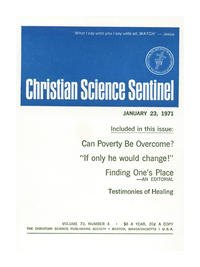