In 1939, my husband was desperately ill and had tried all the...

In 1939, my husband was desperately ill and had tried all the remedies suggested by doctors near and far. One doctor told him a change of climate was the only thing that could help him. He was employed at a large store, and in his department he came in daily contact with a man whose wife was a Christian Science practitioner. One evening we were invited to their home, and much to my surprise the wife made this statement: "There is no need for you to leave here a sick man tonight." I grasped very little of her meaning, but my husband in desperation began to have Christian Science treatment and also purchased the textbook, Science and Health by Mrs. Eddy.

In 1940, we left our home and moved to another state. En route, my husband was completely healed of asthma, the condition which had troubled him. However, we did not understand or acknowledge that this was a healing in Christian Science.

Send a comment to the editors
NEXT IN THIS ISSUE
Article
As a young girl I was raised in a Christian home by devout... 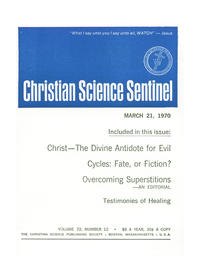