A student of Christian Science was giving a treatment, that is, praying; his eyes were closed. He declared the spiritual facts of God, man, and the universe and saw as unreal what mortal mind was saying about the one he was treating. As he did so, his thought was filled with the realization of the perfection of the infinite God, the perfection of man, God's reflection, and the understanding of the beauty and harmony of God's universe.

A little later the thought came to him that though mortals believe that one cannot see when his eyes are closed, he with his eyes closed had truly seen—had seen that which is real. As he considered this, he understood how different sight is from what mortals believe about sight, and that sight is a much greater thing than many have thought it is. 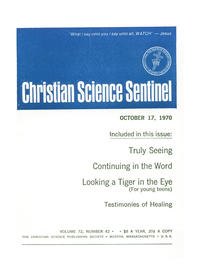