One of the most valued compliments one can pay anyone these days is to say that he can get things done. We have become so inured to the roadblock, the detour, the indefinite postponement, that the human mind boggles at the prospect of a consistent ability to carry things straight through to a correct solution. But since the epic feat of going to the moon has been accomplished, the popular cry is, "Why can't other things be achieved as well?" Our attainments have become so outstanding in some areas of endeavor that the natural demand of the times is that other pressing problems be solved forthrightly.

Great frustration has always attended the belief that men can gain promising concepts but not have the wherewithal to carry them to fruition. The acknowledgment that intelligent ideas come from a higher source, from God, Mind, is not uncommon, but more often than not people tend to assume that once a right idea has come it is strictly up to us to carry it out.

Send a comment to the editors
NEXT IN THIS ISSUE
Article
Repression or Expression? 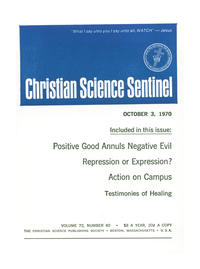