I am grateful for the privilege

I am grateful for the privilege of having been born and raised in a Christian Science family and of having known no other religion or physician.

Christian Science was brought to the attention of my parents many years ago at a time when my mother was a semi-invalid and the doctors said nothing could be done for her unless it was through surgery. The day before she was scheduled to go to the hospital for an operation, she was very discouraged and decided she could not go through with it. My father had heard of Christian Science, and he asked my mother if she would like him to call a practitioner. She agreed, and a practitioner was called. Mother had an instantaneous healing, and the next day she was leading a normal life.

Send a comment to the editors
NEXT IN THIS ISSUE
Testimony of Healing
I desire to express gratitude for Mary Baker Eddy, God's messenger... 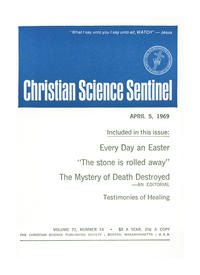