In a world beset by problems of every sort that demand sober thinking on the part of the alert citizen, it is important for each individual to decide for himself the basis on which he will face and solve them. Will he become angry and lash out at the personal, community, or national level at what he believes to be unjust, unethical, or illegal actions of others? Will he apathetically adopt the frame of mind that says, "What's the use? I can't fight the system!" Or will he call upon his Christian heritage to seek answers by asking for divine guidance so that he may know what is right to do and say, even though his stand may run contrary to public opinion?

In his message to the Corinthians Paul described the wisdom required for such a stand: "Though we walk in the flesh, we do not war after the flesh," II Cor. 10:3; and, speaking of unbelievers, "Wherefore come out from among them, and be ye separate, saith the Lord, and touch not the unclean thing; and I will receive you." 6:17 ; Obedience to these Scriptural commands brings release from many of the false demands of worldliness.

Send a comment to the editors
NEXT IN THIS ISSUE
Poem
LET'S BE ON GUARD! 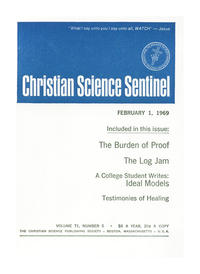