"And I John saw the holy city, new Jerusalem, coming down from God out of heaven," we read in Revelation, "...and the twelve gates were twelve pearls." Rev. 21:2, 21; Just what does it mean that the gates to this holy city, or heaven, were made of pearl?

Christ Jesus in one of his parables tells of "one pearl of great price," for which a merchant man "went and sold all that he had." Matt. 13:46; And Mrs. Eddy, telling of John's discernment of the kingdom of heaven states, "Death was not the door to this heaven. The gates thereof he declared were inlaid with pearl,—likening them to the priceless understanding of man's real existence, to be recognized here and now." Miscellaneous Writings, p. 30; 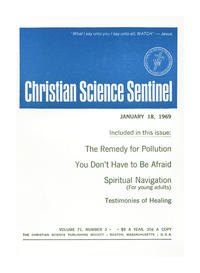