An Interview: with a Diplomat

with contributions from Howard Palfrey Jones

Howard Palfrey Jones was United States Ambassador to Indonesia from February. 1958, to July, 1965. His diplomatic career includes service in Berlin and Frankfurt, Germany; Taipei, Taiwan; and three years as deputy assistant secretary of state for Far Eastern Affairs. He is presently chancellor of the East-West Center, a project of the Federal Government in cooperation with the. University of Hawaii. Ambassador Jones came into touch with Christian Science as a boy when his mother was healed of tuberculosis after doctors had given her up.

In the vast overturning among the nations it appears that governments that mismanage power and avert justice will continue to collapse or be overthrown until a higher sense of government is established. 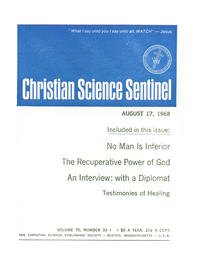