A woman disliked the hot days of summer and dreaded the prolonged heat waves that occurred quite often. She listened to the weather reports each morning and allowed the general complaints to take root in her thinking to such an extent that she was miserable and uncomfortable most of the time. Though she turned to Christian Science for healing in times of illness, she was convinced that weather conditions were beyond control. Then a member of her family remarked that her trouble was no different than a disease—that it was in fact disease. This startled the woman, and she commenced additional constructive study.

She turned to the Bible and thoughtfully read the story of Shadrach, Meshach, and Abednego. These three Hebrews worshiped God. King Nebuchadnezzar also worshiped, but his god was a golden idol. In his zeal to be faithful to his idol, the king demanded that Shadrach, Meshach, and Abednego fall down and worship it. However, because they could not worship what they knew to be untrue, the king in anger ordered them thrown into a fiery furnace. But instead of burning they walked in the midst of the flames unharmed. In amazement the king summoned them, and the three men walked out. It is related that upon their "bodies the fire had no power, nor was an hair of their head singed, neither were their coats changed, nor the smell of fire had passed on them."  Dan. 3:27; 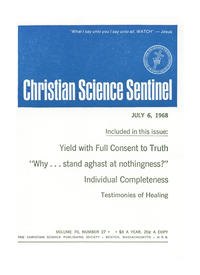