Many problems in today's world are believed to stem from the individual's conflict with the environment in which he lives, often the environment into which he was born. He is accustomed to think that there can exist around him obstacles that block his progress, conditions that work against his health, persons and circumstances that make happiness and right activity difficult if not impossible. The resentment and rebellion he feels may take such forms as sickness, poverty, unprincipled behavior, or apathetic acceptance of the undesirable conditions.

To one struggling against unfavorable surroundings of any sort, even those that appear to him to be hopeless, Christian Science brings joyful assurance. It declares that he is not a helpless victim of a material environment, no matter how threatening it may seem or how long it has been his experience. He is in reality the man of God's creating. 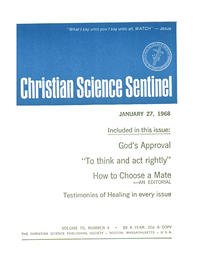