"Mind is the source of all movement"

Physical science teaches that all matter is in constant motion, from the infinitesimal atom to the mighty star islands or galaxies that occupy infinite space. It advances certain theories concerning the movement of all material objects, but mental power, distinct and apart from matter, is not given much credence. Indeed, thought generally is seen to be a material process, an organic function, produced by electrical impulses in the brain and having no power in itself to alter or control the movement of the material cosmos.

Christ Jesus had a very different conception of the laws of motion. Mary Baker Eddy says of him in Science and Health with Key to the Scriptures: "Jesus of Nazareth was the most scientific man that ever trod the globe. He plunged beneath the material surface of things, and found the spiritual cause." Science and Health, p. 313; 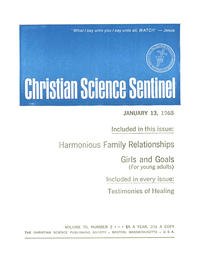