Youth: A Problem or a Power?

Youth is a power in the world. The old and new nations know this. All religious denominations, institutions of learning, publishers, television and advertising executives, and manufacturers, including drug, liquor, and tobacco companies, know it. Organized crime knows it. What do the rapidly expanding hundreds of millions of young people all over the world understand about the power they wield?

Young people know a great deal about the human expression of power. This generation was raised on power: the power which penetrates outer space, which computes complicated information at lightning speeds, which probes every facet of human existence. Having broken away from outworn methods of calculation, youth has also broken away from archaic traditions, dogmas, and bigotries. 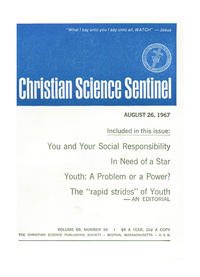