In many wonderful ways God has shown our family that He is...

In many wonderful ways God has shown our family that He is the only power. A healing that my mother had several years ago proved to be a great blessing to all and has often given me strength when things have been difficult.

Mother became very ill, and Christian Science treatment was given for some time. Members of the family who were not Christian Scientists grew very anxious and decided she must be taken to the hospital for medical treatment. The condition was pronounced uremic poisoning, which was affecting the brain. She had been delirious for some weeks, but soon after being in the hospital she became unconscious. In a few days we were informed that nothing more could be done for her. One night after midnight my father and I were called by the hospital to come immediately because Mother was on her deathbed, as they put it. They said we would have to hurry to get there before she passed on.

Send a comment to the editors
NEXT IN THIS ISSUE
Testimony of Healing
About forty-five years ago I was under a doctor's care for what... 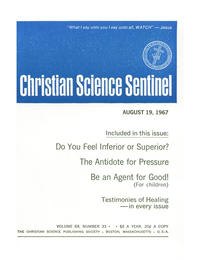