When I was refused a driver's license in 1949 because I had failed to pass the required eyesight test and had been ordered to obtain eyeglasses, I did not remonstrate, but took the first step toward compliance by making an appointment with an optometrist. Within the same hour I wrote to a Christian Science practitioner of my acquaintance and asked for treatment.

The practitioner replied as follows: "Your letter has just reached me and I shall be doing the work for you later today. One treatment should be sufficient.

Send a comment to the editors
NEXT IN THIS ISSUE
Testimony of Healing
One day while doing some cooking, I severely burned my whole... 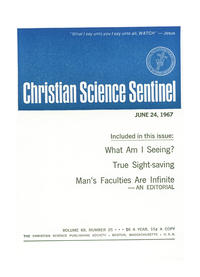