It was in the year 1915 that I first heard of Christian Science. There was not much said to me about it at that time. Then about fifteen years later I was introduced to this Science by the man I was working for on a farm.

At that time I was in need of a healing of a long-standing ailment. I asked him if he knew of anyone who had been healed through Christian Science. He replied, "Yes, I know of several." One of them was his father, who lived nearby. So that evening I walked over to see him. I wanted to hear what he could tell me about his healing. He told me that he was healed of ulcers of the stomach within a few days and how grateful he was for it all. This impressed me so much that on the following day I went to see a Christian Science practitioner.

Send a comment to the editors
NEXT IN THIS ISSUE
Testimony of Healing
The testimonies published in the Christian Science periodicals... 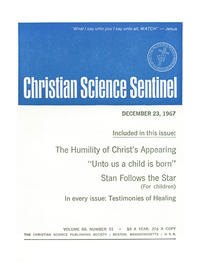