Many people believe that they live in an age of constant danger. The great nations of the earth and their forces of matter— stockpiles of nuclear weapons and intercontinental rockets poised for global war—make these times appear like one huge powder keg ready to be set off at any given moment.

But such threats to existence do not go unchallenged by the student of Christian Science. He is learning through his study of the Bible and its spiritual interpretation in this Science the truths of God and His infinite and supreme power. He is learning how to come to grips with and answer successfully the question, "Which am I to believe and trust in—the power of God or the so-called power of matter?" In other words, "Am I going to be frightened by the destructive claims of the so-called forces of matter, or am I going to be enlightened by the truth that all power belongs to God?"' 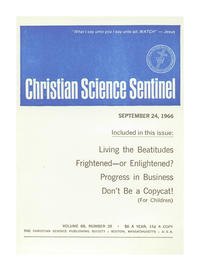