The Dynamics of Love

"Dynamics" is a word not often associated with the thought of love, for it is usually considered as a branch of mechanics. But it can also refer to moral or intellectual forces, and in this sense it may be used to signify spiritual power. In fact, the Greek word translated "power" in many passages of the Bible is the same word as that from which our word "dynamics is derived.

In "Miscellaneous Writings," speaking of the true interpretation of God, Mary Baker Eddy, the Discoverer and Founder of Christian Science, says, "It explains the eternal dynamics of being, and shows that nature and man are as harmonious to-day as in the beginning, when 'all things were made by Him; and without Him was not any thing made.'" Mis., pp. 258, 259; 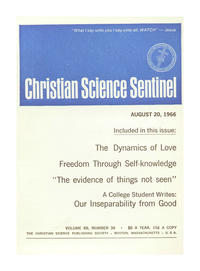