[The above is an abbreviated, postproduction text of the program released for broadcast the week of December 16-22 in the radio series, "The Bible Speaks to You." Heard internationally over approximately 1,000 stations, the weekly programs are prepared and produced by the Christian Science Committee on Publication, 107 Falmouth Street, Boston, Massachusetts 02115.]

Announcer: At this season of the year the Christ message of healing may sometimes seem almost lost in all the preparation, flurry, and excitement of holiday plans. And yet, isn't healing discord of every sort one of the greatest gifts mankind can receive?

Speaker: As was brought out in our previous discussion, Christ Jesus was the greatest healer the world has ever known. He healed all manner of sickness, sin, grief, lack, worry, and even death. His unique position is indicated in these words from Paul in the Bible (I Tim. 2:5): "There is one God, and one mediator between God and men, the man Christ Jesus." 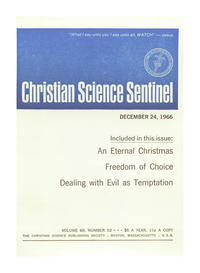