Christ Jesus said, "I will pray the Father, and he shall give you...

Christ Jesus said, "I will pray the Father, and he shall give you another Comforter, that he may abide with you for ever" (John 14:16). Christian Science is indeed the Comforter. People the world over are being uplifted and regenerated by the truth explained in Science and Health by Mrs. Eddy. I am so very grateful for the many healings and blessings that I have experienced through the study and application of Christian Science.

When I was a child, my mother was told that my brother could be healed of the effects of infantile paralysis and curvature of the spine if she would read Science and Health. Many doctors had done all they could do for him and had said that he had only a short time to live because his kidneys too were becoming paralyzed. My mother began reading and called a Christian Science practitioner to pray for him. I shall never forget how happy we all were when he could move one of his toes. Before long he was walking; he went to school and was fully restored to normal health.

Send a comment to the editors
NEXT IN THIS ISSUE
The Bible Speaks to You
RADIO PROGRAM NO. 240-Overcoming Strife at Work 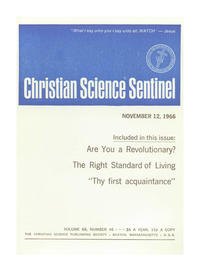