If one were brought to trial for breaking a law which did not exist, he could obtain his freedom by making the right kind of protest. This protest would be more than a mere plea of not guilty; it would show the nonexistence of the law.

Christ Jesus understood the law of God. He healed disease according to this law. When someone was ill, Jesus did not accept the illness as God-sent. His plea, therefore, was not to God in the hope that God would set aside His law. When his disciples suggested that a man had been born blind because he or his parents had sinned, Jesus said, "Neither hath this man sinned, nor his parents: but that the works of God should be made manifest in him" (John 9:3) And he healed him. 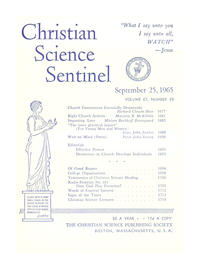