[The above is an abbreviated, postproduction text of the program released for broadcast the week of October 22-28 in the radio series, "The Bible Speaks to You." Heard internationally ever more than 950 stations, the weekly programs are prepared and produced by the Christian Science Committee on Publication, 107 Falmouth Street, Boston, Massachusetts 02115.]

QUESTIONER: There are many people, young and old, who feel alone and are unhappy about it. What do you think lies at the root of loneliness?

SPEAKER: Very often people think of loneliness as simply an estrangement from a friend or from a loved one being separated from them. But it goes much deeper than that. 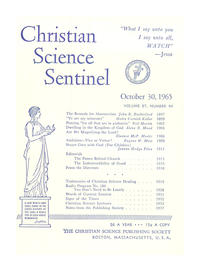