Liberty is not the absence of compulsion or restraint, as anyone who gave a second thought to the matter would realize. If everyone were free in this sense, no one would be safe. The pursuit of happiness may be an inalienable right, but we must limit those whose happiness consists in destroying other people's property. There are many such limitations which civilized people place on themselves and others. 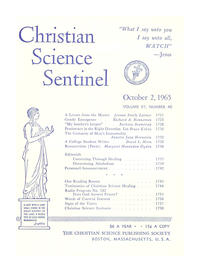