A few months after David and his family had moved to a new home, a baby brother was added to the household. Before the new baby arrived, Mother and Father had a talk with David and with his sister, Shirley, and his brother, Douglas. They said that since Mother would have a great many added duties caring for the new baby, each one of the children should cooperate with Mother and relieve her of many household tasks. This would be one way of expressing love not only for Mother but also for the new baby.

After the baby came, David awoke late one night feeling ill. He wanted to call Mother and tell her so that she could comfort him. But he heard her go into the kitchen, and he knew she was up feeding his new brother. He wanted very much to cooperate with Mother and to help her; so he decided he would try to work out the problem by himself.

Send a comment to the editors
NEXT IN THIS ISSUE
Editorial
Parents, Teen-agers, and Self-government 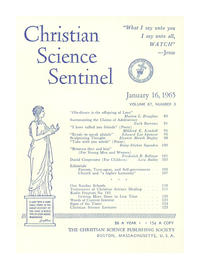