At one time my wife spent several...

At one time my wife spent several days in the hospital for examinations and tests and was then told to go home for a few days' recuperation. The doctor told her he wanted to see me. He told me the X rays showed a condition in her stomach for which she would need an operation.

Meanwhile, a friend of ours told us she had been in that hospital for three years with supposedly no chance of getting out alive and then had been healed through Christian Science. The next day I helped my wife up the long stairway to a practitioner's office. I asked when I should return for my wife and was told to come back in about thirty minutes.

Send a comment to the editors
NEXT IN THIS ISSUE
Testimony of Healing
We are so thankful in our family... 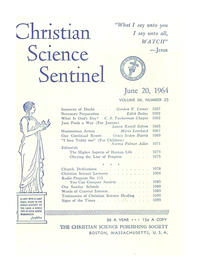