Over thirty years ago, a friend...

Over thirty years ago, a friend told me that Christian Science would be a great help to me. I did not know anything about Science at that time, and although I had attended four different Protestant churches over a period of several years, I did not feel that I understood much of God. I agreed to attend a branch Church of Christ, Scientist, regularly and to find out for myself just what this religion was like.

I had no thought of being helped or healed; but I had a badly injured knee that had not been cured, although I had been under a doctor's care for two years. The sincerity of those who testified at the Wednesday evening testimony meetings so impressed me that I purchased a copy of the Christian Science textbook by Mrs. Eddy, and began to read and study this wonderful book.

Send a comment to the editors
NEXT IN THIS ISSUE
Testimony of Healing
While I was recently reviewing... 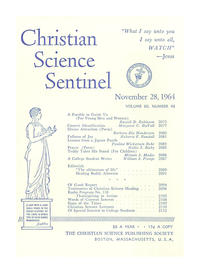