My first healing in Christian Science took place when I was very young and broke a collarbone. My mother immediately called a practitioner, who lived over ninety miles away, and asked for treatment for me. In a few days all evidence of the break had disappeared. My father, not a Christian Scientist at the time, was not thoroughly convinced that a healing had taken place; so he took me to a doctor for a verification. The doctor's words were: "Yes, it was broken. But it has mended far better than I could have set it."

Among other healings which have been brought about through Christian Science treatment alone is that of the aftereffects of being struck by an automobile when I was about eight years old. Kindly passersby urged me to go to a doctor. I refused, declaring I wanted to go home. I had been hurtled through the air and had struck my head and shoulder on landing. My shoes had been forced off me by the impact, and I was momentarily rendered unconscious. At no time do I recall any sense of fear. 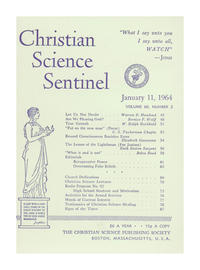