Christian Science is a religion of Love. The practice of Christian Science demands the unselfed love which willingly examines international problems for the purpose of giving oneself in prayer for their solution in a way that will bless all concerned.

Scientific prayer is based upon an acknowledgment of God as the Supreme Ruler of the universe, including man. It acknowledges further that the real man is God's perfect image and likeness. Facing the elements of the problem, then, this prayer separates the real concepts of God and man and government from the unreal concepts. It denies as unreal the mortal sense of government, which presents man as a mass of mortals subject to the whims of other mortals. It replaces this false concept with the truths of God as the only Mind of man, the only Principle governing man, the only Spirit motivating man, and of man as God's child, responding joyously and without rebellion to His perfect will. 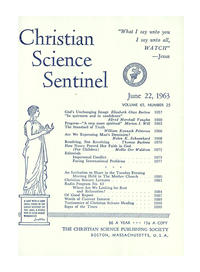