The Bible and Science and Health

Century after century the Bible has inspired and guided those who have turned to it as the Word of God. Through the Bible many spiritually hungry people have come to recognize God's existence and to obey His moral code, intuitively recognizing its rightness. They have revered Christ Jesus as the Saviour of the world and have endeavored to obey the Christian law of love and brotherhood, which he laid down.

However, Christians have often felt frustrated by their inability to carry out the Master's requirements to heal the sick and sinful and to overcome the seeming power of matter as he did and as he said his followers would do. Something has been lacking. People have sensed that treasures were locked within the Scriptures and that something was needed to make these treasures available. And they have been right. 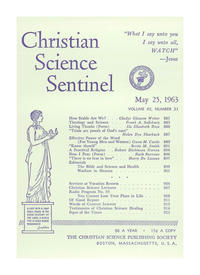