[The above is substantially the text of the program released for broadcast the weekend of March 22—24 in the radio series, "The Bible Speaks to You," heard internationally over more than 800 stations. This is one of the weekly programs produced by the Christian Science Committee on Publication, 107 Falmouth Street, Boston 15, Massachusetts.]

RADIO PROGRAM No. 51 - The Remedy for Boredom

HOST: People have more opportunities today than ever before for education, travel, and recreation. And yet boredom is still a problem for many. Some youngsters, for example, in spite of their books and games, toys and television, often pester parents with the familiar cry: "I haven't anything to do. What shall I do now?"

Dr. Renè Dubos, of the Rockefeller Institute, talked about the serious side of this problem in his book "Mirage of Health." He said: "Boredom is not easy to define or to recognize, and its onset is insidious. It often masquerades in the passive forms of entertainment, in the dreary hours of aimless driving, in anonymous holidays which have lost their meaning because they are no longer holy, as well as in the attitude of the person who 'couldn't care less' about the events of the world around him. Its manifestations go from the various forms of escapism, such as addiction to drugs or alcohol, to suicide, which relieves the victim of the need to care about anything." [Harper & Row, Publishers. Copyright, 1959, by Renè Dubos.] 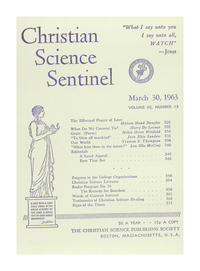